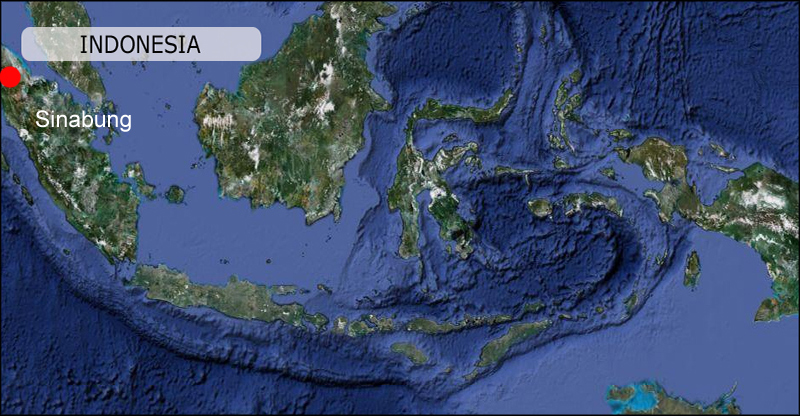 Gunung Sinabung is a Pleistocene-to-Holocene stratovolcano with many lava flows on its flanks. The migration of summit vents along a N-S line gives the summit crater complex an elongated form. The youngest crater of this conical, 2460-m-high andesitic-to-dacitic volcano is at the southern end of the four overlapping summit craters. No confirmed historical eruptions were recorded prior to explosive eruptions during August-September 2010 that produced ash plumes to 5 km above the summit. In 2013 the Volcano started to erupt again. On 31st December troughout January 2014 it produced pyroclastic flows that reached lengths of up to 5.5km.

Had the opportunity to observe Sinabung in the period between 11th to 13th January 2014. Prior to my visit news reports had reported eruptive activity and pyroclastic flows since 31st December 2013.

On arrival in the area I positioned myself 5,7 km SW of the volcano, looking at the S/SW flank of the volcano that have been  impacted by the recent pyroclastic flows. I was approximately standing 2-3km West from this flank, a few fairly deep gorges separated me with the volcano, so I considered it a relatively safe location at the time being.  During other times I photographed from 10km S/SW. The nearest town in the area is called Brestagi.

I observed many pyroclastic flows during the period i stayed in the area, all followed the same flank down to its base, or dispersed before reaching it. During nighttime the flank were illuminated by hot pyroclastic debris (see photo 11 to 15.) and other material burned by the heat of the pyroclastic debris. At the time a new pyroclastic flow was initiated from the crater, the crater started to glow a few seconds before the sounds of rock-fall become evident. Judging from photography’s from the period I visited, it seems that the pyroclastic flows that I observed, were set off by partial-collapses of the growing lava-dome, and not by the collapse of an eruption plume. In fact I did only observe some ash-venting from the crater itself, most of the plumes originating from the crater, seemed to be mostly consisting of gas. Ash-fall in the areas impacted by the volcano at the period I visited, therefore, I figure was mostly or only caused by, ash produced by the pyroclastic flows. Because of the fact that the volcano peak was mostly covered in clouds during the visit, I was only able to photograph the growing lava dome (or parts of it) once. 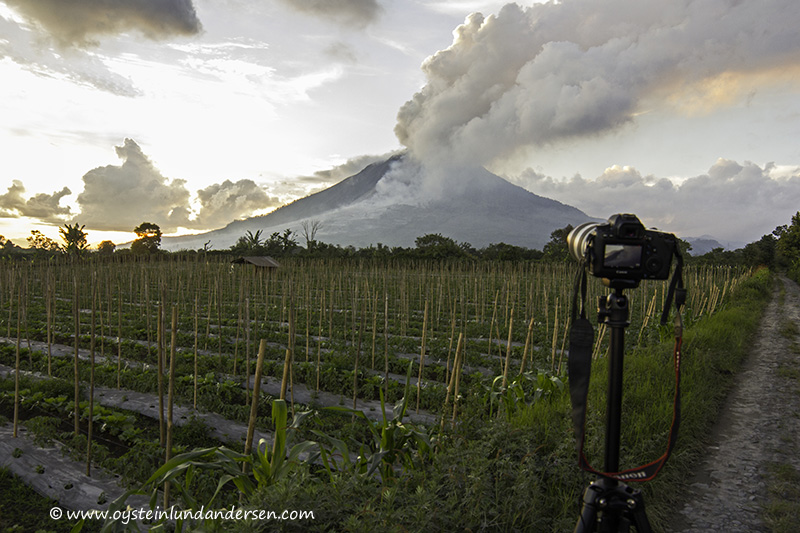