Arrival at the coast of Java (Carita) in the evening on the 4th August. Found a quiet spot along the seashore, and were able to observe Anak-Krakatau erupting in the Sunda-strait, 47km West of my position (See photo no.1). Loud eruption sounds (like the sound of thunder/distant canonfire) were heard more or less every minute or so. I observed the Volcano for around 45min from 23:45 local time (4th August) to 00:30 (5th August). During the night, the walls and windows of the building I was staying in (50km from Anak Krakatau), in the same area, was occasionally shaking. The visual view and sound of the eruption seen from Carita, were similar to the observation I did on the: 13th July 2018:  see this report

In the morning of the 5th August, the sound of the eruption from Krakatau was still occasionally heard from Carita, even tough there were now more noise pollution in the area I was situated.

Arrived at Rakata island on Krakatau at 09:30 in the morning (5th August). Rakata isl. is located 4km South of the active Anak-Krakatau cone, and is outside the current restriction/danger zone set by the Indonesian Authorities. The restriction/danger zone for Anak-Krakatau is currently (as of 8th August) at 2km from the summit-crater, recommended by the Indonesian `Center for Volcanology and Geological Hazard Mitigation`(PVMBG).

Anak-Krakatau was in a state of continuous eruption (Strombolian?). The sound of the eruption was similar to the sound heard from the coast of Java observed the night before, but naturally louder. The new eruption phase that according to Indonesian Authorities (PVMBG) started in June 2018, seem to have resulted in a new cone forming on the southern side of the summit of Anak-krakatau. During my flyover with a drone in April 2018, only a small vent was present on the Southern side of the summit (see photos here). The new cone vent looks to have increased the height of Anak-krakatau by a few to tens of meters. I would characterize the eruption as sustained pulsing explosions, relatively ash-rich, with the occasional larger explosions in between.  The eruption plume reached heights of maybe 1000m and drifted East/Northeast most of the day (see photo no. 12). The majority of the ash must have been course, since the initial dark grey ash-rich plume was almost white in color when it had reached its max-altitude (see photo 8), meaning the coarse ash mostly fell on and in the immidiate vicinity of Anak-Krakatau. The eruption also produced a large amount of lava-bombs. The largest explosions produced the most lava bombs, ejecting them to heights of maybe up to 400m above Anak-Krakatau. Some reached the sea on the Southern side of Anak-Karkatau, but the majority landed on the volcano itself.  The eruption have also created a small lava-flow on the Southern flank of Anak-Krakatau (see photo 2, 3 & 7).  The lava-flow had reached the ocean before my arrival, and was evident by a white plume of water vapor rising 50-100m above the point of contact by the seashore. Small explosions were sometimes observed where the lava made contact with the sea. On nightfall,the lava flow on the Southern  flank was glowing, formed by what seemed to be accumulation of more hot looking fluid lava. The hot more fluid looking lava was even visual during the day during my flyover with a drone (see photo 48 & 51 ), especially the upper more narrow part of the flow. (see photo 21 & 25).

At around 17:00 (5th August) in the afternoon the explosions became less ash-rich. The individual explosions became more easy to differentiate, the time between the explosions were in the range 1-30 seconds, with the majority only seconds in between. Some explosions were larger than the majority, and seemed to arrive after the longest period of calm in between. Even the largest explosions after 17:00 in the afternoon did not produce as much ash as earlier in the day. The less ash-rich explosions in the afternoon created larger eruption sounds than the ash-rich explosions, was my impression.  During the night this activity continued, with explosions every 1-30 seconds. In the morning activity seemed to have decreased, both the frequency and size of the explosions. Looking at the seismigram of the 6th August (see Seismogram nr.2 below), seismicity also seem to confirm a decrease in activity at Anak-Krakatau during 6th August.

The eruptive activity I observed at Anak-Krakatau during this visit was similar to the 2012 eruption that I observed.Both the 2012 and 2018 activity I observed  was characterized by continuous explosions and both emplaced lava-flows. The 2012 lava-flows were however much larger and more significant than the 2018 lava flow, at the time of writing.

For reference see also: Image below captured by Sentinel 2,  on the 6th August.

Important Note: This is my personal notes, and should not be considered as Official information regarding the volcano or its activity. For updated information and official statements on the volcanic activity of Krakatau Volcano, visit the Indonesian authorities website MAGMA Indonesia. and Center for Volcanology and Geological Hazard Mitigation`(PVMBG).  On Twitter (@id_magma and @vulkanologi_mbg)

The restriction/danger zone for Anak-Krakatau is currently (as of 8th August) at 2km from the summit-crater, recommended by the Indonesian `Center for Volcanology and Geological Hazard Mitigation`(PVMBG).

All photos and videos in this article and obtained during this trip, including the drone footage –  was acquired from outside the restriction/danger zone of 2km radius from Anak Krakatau. It is very important to observe these safety recommendations given by Indonesian Authorities.

Photos and Videos published are available for purchase. If you want to purchase photos or videos, please see this page

The seismograms have been aquired from MAGMA Indonesia

Important note: All drone footage –  was acquired from outside the restriction/danger zone of 2km radius from Anak Krakatau. It is very important to observe these safety recommendations given by Indonesian Authorities.

Photos added in 2020 (from the same trip ofcourse) 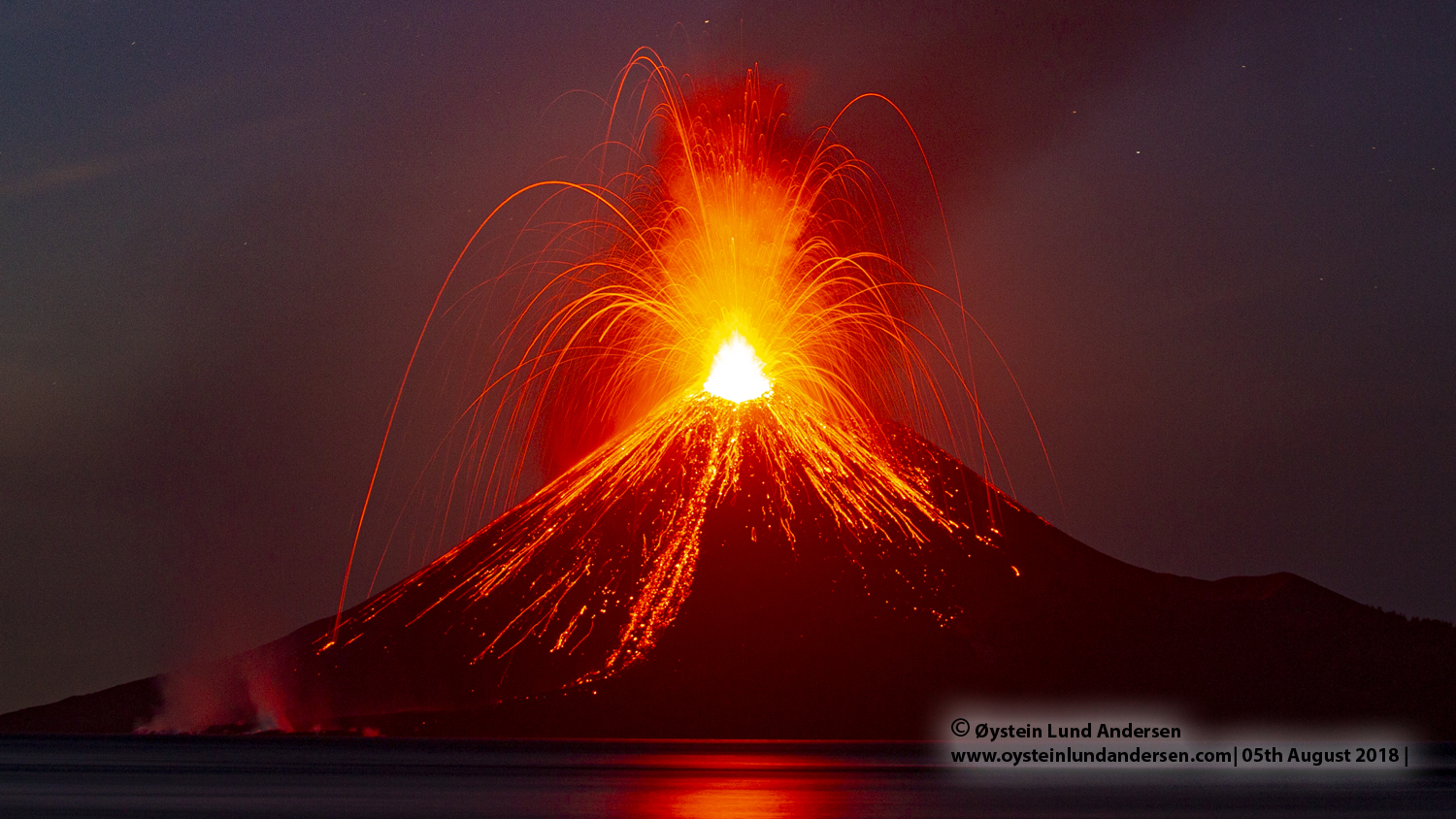