According to multiple sources, including information from the Centre of Volcanology and Geological Hazard Mitigation (PVMBG) trough its communication centre: Magma , new eruptive activity was confirmed in June 2018. On the 12th July 2018 at around 19:00 in the evening,  I noticed that a eruption from Krakatau was visible at the online PVMBG Krakatau CCTV. A glow was present in the middle of the Sunda Strait, and after seeing multiple frames, I was convinced that it was actually Krakatau. I made the decision to drive to the coast of Java to see for myself.

Few hours later, at around 23:45 local time on the 12th July  I arrived at the coast of West-Java in the district of Anyer. Almost immidiatly after stepping out of the car,  I heard a rumbling sounds originating from the horizon in the direction of Krakatau. It sounded like far-away/distant canon fire, and could probably be mistaken as thunder (even tough no thunderstorm were present).  The sound arrived in a irregular frequency, sometimes several times during a 30sec period, sometimes there were a 1 minute or more breaks between the arrival of sounds. The strongest sound could be felt like a wave hitting you or a vibration in the air. In a building windows and walls were shaking, and even making a shaking-sound during the most deepest/strongest booming-sounds. Altough large swells/waves often created noise where I was standing, I could still hear the rumble from Krakatau. So strong were the sound from the volcano. Over the years visiting the area when Krakatau have been erupting, I have never experienced this. To listen to the sound, check out this video that include the sound. (Please use appropriate headset, with bass capabilities. Without it you will only hear the sound of insects. Note that the record is not in its original form, as periods of calm have been removed, to highlight the eruption sounds. The original is available upon request.)

Out at sea Krakatau was glowing red on the horizon. Using my zoom-lens I was able to see and photograph the ongoing eruptive Activity, even tough I was situated  47km from Krakatau. From what I could see, Anak-Krakatau was in a state of continous eruption. Please see photo 3-10 below. Also I have added a timelapse video of the individual photo frames of Krakatau, see video below.  Incandescent material was being erupted continously, and lava seem to almost reach the sea on the Southern side. Might indictate a new lava-flow to the South?. Sentinel 2 satelite image of Anak-Krakatau of 12th July seem to support this idea, as you can see something that looks like a black-lava flow to the South. The flow however does not seem to have reached the sea (as of 12th July image). See also MODIS image of hotspots detected between 11-16th July, that confirms Activity at Anak-krakatau.

I visited the PVMBG Krakatau observatory in Anyer. The staff (1+1 shift) were busy reading and taking notes from the seismogram (see photo no.1 and 2 below), and could tell that Anak-krakatau had been in this state of continous eruption since 2 days ago (11th July?). The rumbling sound from the eruption could even be heard within the observatory, and windows/walls were shaking, and made a shaking sound – when the largest sound-waves hit the observatory.

I observed, photographed and recorded sound from the eruption during a period of approx. 3 hours in period 23:45 local time on the 12th July to 03:30 local time on the 13th July. The eruption was continous during the whole 3 hours of observation. The experience being able to listen/feel the eruption of Krakatau from the mainland of Java, almost 50km away as indeed a rare one and great experience. Having experienced several eruptions at Anak-Krakatau before, including being at Rakata Isl. (4km from) during the eruption that emplaced a lava flow in September 2012, naturally the sound experience was totally different. Because of the difference in distance from the volcano. Being at Krakatau during 2012 was just like listening to a explosive jet engine, but as described above – listing to the eruption from far was like the sound of distant canonfire.

Important Note: This is my personal notes, and should not be considered as official information regarding the volcano or its activity. For updated information and official statements on the volcanic activity of Krakatau volcano, visit the Indonesian authorities website MAGMA Indonesia.  or on Twitter (@id_magma and @vulkanologi_mbg) 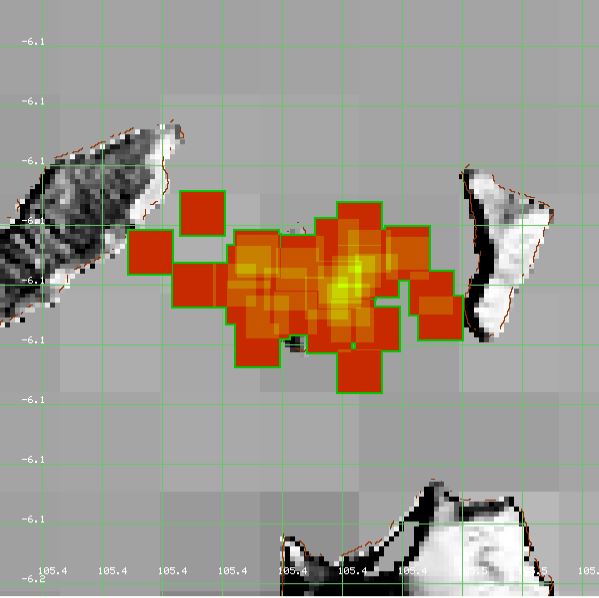